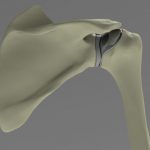 and a metal alloy, cobalt-chromium-molybdenum. It more closely replicates the shape of a normal shoulder than do other devices currently on the market. Dr. Goldberg began developing the implant four years ago and founded Catalyst OrthoScience to bring the device to market. He holds several patents for the device, with others pending.

Since receiving FDA approval last month for use in live patients, Dr. Goldberg has implanted the device in more than half a dozen patients, including two surgeries performed at Seaside Surgery Center.

Catalyst OrthoScience, under the leadership of CEO Steven Herrington, recently received a round of funding from Naples-based investment fund Tamiami Angel Fund II. The money will go toward building inventory, beefing up sales and marketing, and completing the management team, according to fund Chairman Tim Cartwright.

Herrington reports that Catalyst OrthoScience has reached an agreement with a global partner to manufacture the CSR Shoulder System. Herrington predicts that there may come a time when the company will manufacture the product on its own, but the costs are of doing so are too high for a fledgling firm.

Consistently chosen as one of Castle Connolly’s Top Doctors, Dr. Goldberg is an eight-time recipient of the Patients’ Choice Award. He is a board certified orthopedic surgeon and specializes in Sports Medicine in his private practice. Dr. Goldberg also serves as the chief of the division of orthopedic surgery at Physicians Regional Healthcare System in Naples.